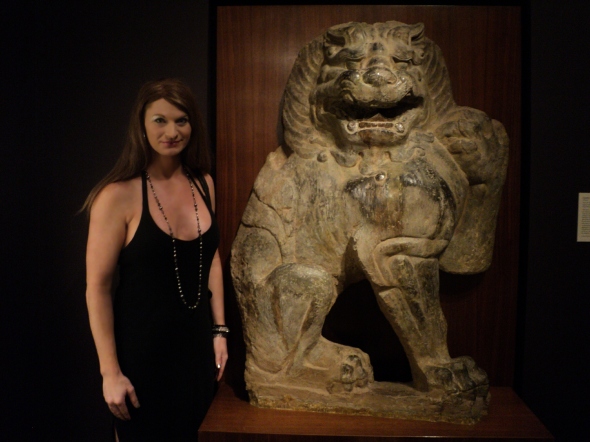 Chinese guardian lions, known also as Imperial guardian lions, shishi lions, or stone lions (石獅, Pinyin: Shíshī) in Chinese art and often (incorrectly) called “Foo Dogs” in the West, are a common representation of the lion in pre-modern China. They are believed to have powerful mythic protective powers that has traditionally stood in front of Chinese Imperial palaces, Imperial tombs, government offices, temples, and the homes of government officials and the wealthy from the Han Dynasty (206 BC-AD 220).

In Japan: the lion figures are known as Komainu (狛犬・高麗犬, lit Korea dogs) possibly due to their introduction to Japan through Korea.

The lions are always created in pairs, with the male holding the world in his hand and the female with holding a cub. They occur in many types of Chinese pottery and in Western imitations. In the photo above, the lion is a female holding her cub in her left leg.

“The general who advances without coveting fame and retreats without fearing disgrace, whose only thought is to protect his country and do good service for his sovereign, is the jewel of the kingdom.”

I hope that you enjoy today’s lesson, and I hope that it helps you with your training. Take Care, Be Safe and Good Luck in your Journey of Budo.